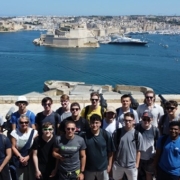 The 4CM spent one week in Malta for a language trip. These are some impressions:

The ESE-Learning program, which we attended for four days, was, shortly said, really fun. On the first day, we had a different teacher than the following days, but fortunately, both were pretty chill. The teacher we had the longest even suggested some touristic sights, beaches or clubs and parties to go to. Lesson-wise it was very similar to the English lessons we have in Austria, just a little easier. We even took a class picture together.

One of the best host families

Two of us stayed with the host Grace Pellicano and four Slovakian students. Our room was very cosy and we even had a patio. Our host made us breakfast every morning and proper dinner every evening. When we had dinner, she ate with us and we had many nice conversations with her in which she told us what we should visit in Malta. But the nicest thing she did was waking us up at four o’clock in the morning on the day we had to depart for the airport, so she could say goodbye to us. We hope that the next time we are in Malta, we’ll be able to pay her a visit because she was always very nice to us.

On Wednesday we went on a trip to Valletta, the capital city of Malta. The city is heavily fortified, as it was used for defense under the rule of the Knights Hospitaller, identified by the Maltese cross. There are many old and fascinating buildings within the walls and the view is very nice.

On Saturday we started by bus from St. Juliens towards the south of the island. Our first stop was Mosta Dome where we had an external view of the church. We then went to Craft Village where we could admire the art of glass glowing. In Limestone Village we could see the mining and lifestyle of Maltese people from a hundred years ago. The highlight was the boat tour at the Blue Grotto. The trip ended with a pastizzi at a fishing village in Marsaxlokk.

We were allowed to choose ourselves which activities we wanted to do in our free time. In Paceville there are many options such as sunbathing on the beach, playing football, going shopping, going swimming, etc. We were also allowed to go to other beaches or attractions.

Malta, especially St. Julian’s, is well known for its night life. There are over ten well known clubs in St. Julian’s which are packed almost every night (Footloose, Club-H, Havana, Savannah, etc.). Depending on which day of the week you want to go clubbing, there are more or fewer people enjoying the night with you. Usually there are only a few people partying from Monday to Wednesday because the Maltese save their energy for the days from Thursday till Sunday. Weekends including Fridays are the most popular days to go out partying in Malta. There are tens of events every week where you get invited by people on the streets. For example, in this one week in Malta we got invited to about 8 events taking place all over the island which we unfortunately couldn’t go to.

We may request cookies to be set on your device. We use cookies to let us know when you visit our websites, how you interact with us, to enrich your user experience, and to customize your relationship with our website.

Click on the different category headings to find out more. You can also change some of your preferences. Note that blocking some types of cookies may impact your experience on our websites and the services we are able to offer.

These cookies are strictly necessary to provide you with services available through our website and to use some of its features.

Because these cookies are strictly necessary to deliver the website, refuseing them will have impact how our site functions. You always can block or delete cookies by changing your browser settings and force blocking all cookies on this website. But this will always prompt you to accept/refuse cookies when revisiting our site.

We fully respect if you want to refuse cookies but to avoid asking you again and again kindly allow us to store a cookie for that. You are free to opt out any time or opt in for other cookies to get a better experience. If you refuse cookies we will remove all set cookies in our domain.

We provide you with a list of stored cookies on your computer in our domain so you can check what we stored. Due to security reasons we are not able to show or modify cookies from other domains. You can check these in your browser security settings.

We also use different external services like Google Webfonts, Google Maps, and external Video providers. Since these providers may collect personal data like your IP address we allow you to block them here. Please be aware that this might heavily reduce the functionality and appearance of our site. Changes will take effect once you reload the page.